AVJennings is a major partner of the Queensland Firebirds, with the successful team’s former star player Laura Geitz acting as brand ambassador for the developer.

Ms Geitz started the day with the Creekwood Walkers Club, before joining in with a Mums and Bubs workout class hosted by Creekwood's GET HIIT fitness group. Ms Geitz has recently given birth to her first child, Barney, born in February.

Netball players from Meridan Netball Club, Meridan State College and Pine Hills were given exclusive training tips at a clinic led by Ms Geitz, who then headed to the new Creekwood Parkside precinct to view the 26 completed homes overlooking $2 million of parkland including a new 'adventure playground' currently under construction. 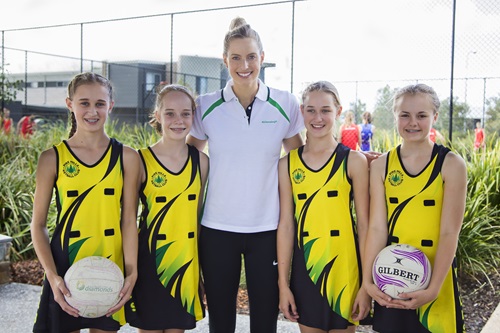 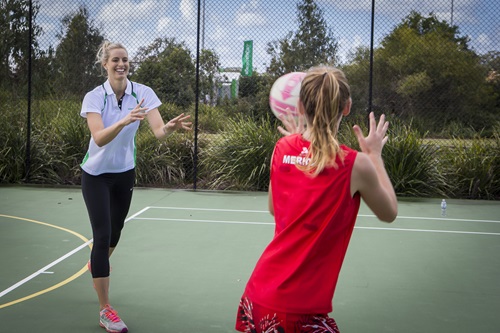 Ms Geitz said she visited Creekwood Caloundra to spread the message about the importance of keeping active and healthy at all stages in life.

"I've just become a Mum so obviously my fitness routine has changed, and I think it's fantastic to see a community like Creekwood offering Mums and Bubs classes to help women stay fit while socialising and spending time with their baby," she said.

"I also enjoyed meeting the Creekwood Walkers Club and think it’s excellent that retirees at Creekwood have formed this group to stay active and social.

"All the netballers I met were delightful students - they were talented, bright and enthusiastic and I could see the benefits the girls were getting from playing team sport."

Ms Geitz said she was impressed by the community facilities at Creekwood Caloundra.

"Getting outdoors and keeping active is so important for adults and children. It’s great to see how well used the existing facilities are with the multi-purpose court, skate park and kids' playground.  I know kids will also love Creekwood's new adventure playground, a great new facility for families.”